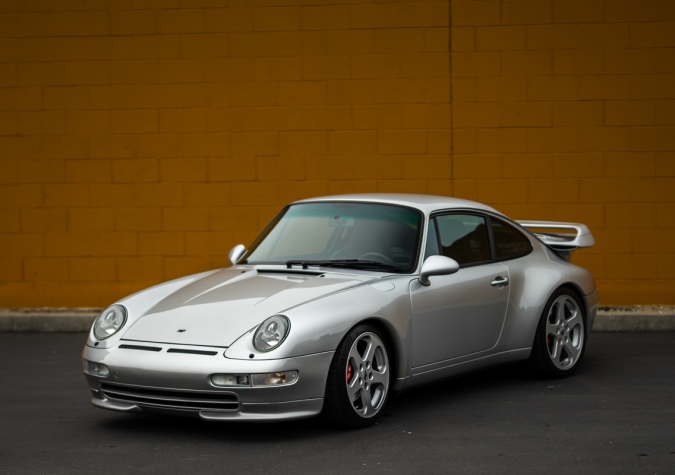 This 1995 Porsche 911 Carrera coupe is finished in Arctic Silver Metallic over Black leather interior. Originally sold to Lou Foubare of Ruf Performance Haus in Florida, who had the car converted to RUF BTR2 specifications by Gulf Perfomance Center in Pompano Beach. Work included fitting a single K27 turbocharger to the 3.6L flat-six, as well as installing RUF pistons, camshafts, and injectors. The 6-speed manual transaxle was also strengthened, and the suspension, brakes, interior, and body were modified as outlined below.

RUF claimed an output of 420 horsepower, which is sent to the rear wheels only. This car was acquired by the seller in March 2015. A $29k engine-out refresh was carried out in June 2017 by a RUF service center in California, including a top-end rebuild and maintenance on the transmission, interior, exterior, wheels, and suspension. Now showing just under 45k miles this 993 RUF is offered from our Monterey showroom with service records since 2015, period literature, a clear Carfax report, and a clean Montana title under the seller’s LLC.

Outside, the BTR2 conversion included altered front and rear bumpers, a fixed rear biplane wing, and a front-mounted oil cooler. The car is finished in Arctic Silver Metallic, and pictures of cosmetic blemishes are provided in the photo gallery below along with paint-depth meter readings. Everything but the passenger door was likely repainted at some point prior to the seller’s purchase, though the recent Carfax report is free of accidents or other damage. Some yellowing of the clear bra on both rear quarter panels is pointed out by the seller.

The RUF suspension system includes Bilstein PSS9 coilovers with custom springs/valving, RUF front/rear anti-sway bars, and a RUF billet aluminum front shock tower bar. The 18" RUF wheels were produced by Speedline and measure 8.5" in width up front and 10" out back. 4-piston calipers are equipped all around, paired with 320mm front and 300mm rear cross-drilled rotors. This car was featured in the May 1997 issue of Car and Driver, a copy of which is included along with the December 1995 issue of European Car.

The seller spent approximately $10k to have a local shop remove the carpeting and sound deadening from the floor and firewall, which were then refinished in black as seen above. During the June 2017 service the following work was also completed:

The odometer currently shows approximately 44,160 miles, about 7,600 of which have been added by the seller.

During the BTR2 conversion, the 3.6L flat-six was fitted with a K27 turbocharger that makes 11.6 psi of boost. The compression ratio was also reduced from 11.3:1 to 8.4:1, and RUF pistons, camshafts, injectors, and engine wiring harness were installed along with a re-mapped Bosch Motronic ECU and a RUF lightweight free-flow exhaust system. Claimed output was 420 horsepower and 420 lb-ft of torque. Note that this car has not completed a California emissions test as the seller has it titled and registered in Montana.

In June 2017 at 39,100 miles, RUF service center Rstrada Limited completed a $29,904 engine-out refresh. The complete 4-page invoice is displayed in the gallery, and work included the following:

The seller also notes that in December 2007 at 15k miles Ruf Autocenter took possession of the vehicle and performed an engine-out refresh, including a motor rebuild and Sachs racing clutch/lightweight flywheel. Xenon headlamps and a RUF steering wheel were also installed, the latter of which is included and pictured in the gallery.