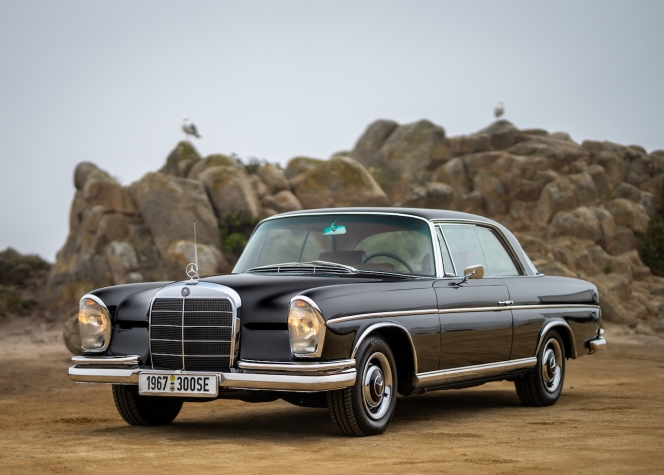 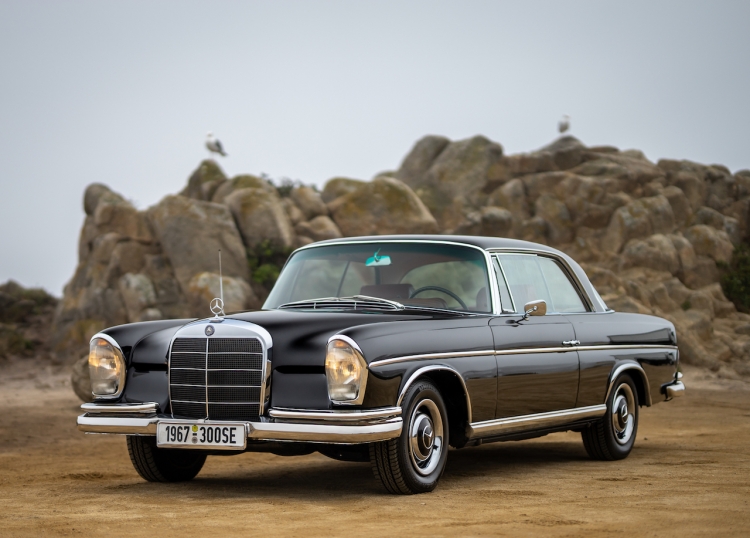 Mercedes-Benz designated the 300SE, an automobile produced from 1962-1967 as the W112. With an option as a coupe, convertible or sedan, these cars were comfortably powered by a 3.0 L fuel-injected M189 six-cylinder big block engine. Let’s not let that take away from the standard luxury features Mercedes-Benz were so good at giving, such as power steering, automatic transmissions, air suspension and a consistently higher level of wood and leather trim that its competitors.

Introduced in ’62, the coupe had a low production number of only 2,419 units built through the end of its run in ’67.

This car was originally purchased from a Mr. George H. Jury of Grand Pointe Farms, Michigan. In a letter from the original owner to the current owner, he indicated that he had taken delivery in Sindelfingin, Germany. Original printed paper documents from Daimler-Benz Aktiengesellschaft reinforce this with a Statement of Origin dated March 15, 1967 another on March 23, 1967 and a final paid invoice to Mr. Jury on March 29, 1967.

In another letter from Mr. Jury, he states that the car was delivered from the factory with US-Spec lights, but he refused the car until the service center swapped over to the European style.

A Confirmation of Order showed Wood Imports, Inc. of Detroit, MI as the dealer who took delivery of the car via French Line House marine transporters of London.

Original manuals, two sets of original keys, fuse kit, service records book and manuals can be found as well. A factory tool kit is placed in its correct space in the trunk.

From 1967 to 2000 the car was kept under Mr. Jury’s care before he sold it to a Mr. Buckingham of Gallon, Ohio. Multiple invoices show great care to the car and a focus on deferred maintenance. The next records indicate the car went to a Chris Mast of Hartland, VT where the car went under an extensive restoration by noted craftsmen Automotive Restorations, Inc.. From May 2017 to November of the same year, this 300 SE was delicately restored in correct specs and finish, with a noted and comprehensive mechanical and suspension overhaul.

Brightwork is excellent all around and looks brand new. Interior shows wonderful and inviting wear especially on the front seats, doors and arm rests, carpet and dash, where the wood has started to shirk and fade a bit.

Rims and tires are like new with fresh aftermarket rubber currently fitted.

Mechanically the car operates exactly as it should, including all headlight and side marker light operations, back-up and brake lights, speedo and tachometer, interior and glovebox lights, horn and factory air conditioning works perfectly.

We’re not sure we have driven such a delightful W112 as this 300SE. From turn of key, through acceleration, braking and overall comfort, this car has ticked all of the boxes, all while retaining a high overall model value in todays market. We think you’ll enjoy the drive just as much as we have.