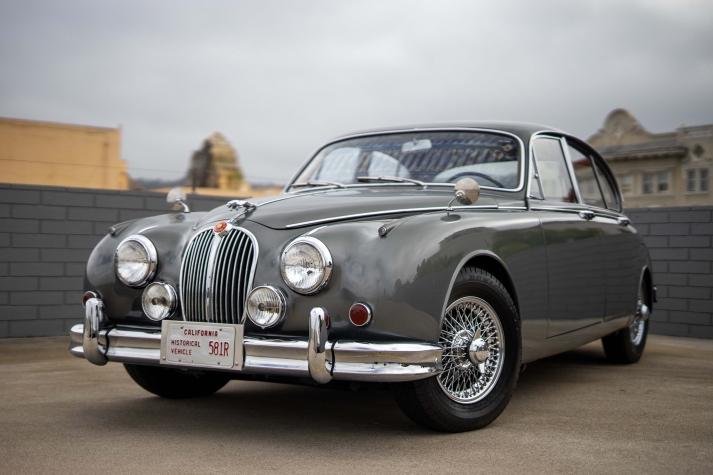 The Jaguar Mark II sedan was a useful and elegant update of the company’s first small unibody sedan, the Mark I of 1955. The modifications resulted in what is often considered to be the best-looking, most compact Jaguar sedan.

Jaguar’s Mark II modified the Mark I design with a larger greenhouse, bigger side and rear windows, a wider rear track that did away with the full fender skirts, a new grille, fitted fog lamps, and standard four-wheel disc brakes. The interior remained a thing of beauty, with a walnut veneer dash, multiple gauges that were now placed in front of the driver, a row of toggle switches, and comfortable leather seats.

The engine range continued to consist of the DOHC aluminum six-cylinder, in 2.4-liter, 3.4-liter and 3.8-liter displacement. Horsepower output ranged from 120 to 210, and top speed went from 96 mph to 125 mph. The transmission was usually a four-speed with overdrive, such as our subject car. Most cars had independent suspension all round and many cars were built with wire wheels, which is the preferred configuration today.

Jaguar Mk IIs are catnip to British car collectors, despite a costly and rigorous maintenance schedule. Rust is an ever-present problem and brakes can simply disappear if the car is left to sit for a month. The dashboard’s wood veneer is inclined to delaminate and is susceptible to both sun and dampness. A vinyl interior is less preferable, as is an automatic transmission – though those are the cars that have often survived in the best condition.

Originally brought over from New Zealand where it was owned since new by a single owner. This car is mostly a survivor and has been owned for the last 13 years by the current owner.

The seats are genuine Connelly leather and are in original condition along with the headliner.

Genuine wire wheels were an upgrade and a highly desirable option.

This Jaguar was converted from RHD to LHD and the dash has been custom made by Madura Concepts of Santa Barbara, California.

All recent work and maintenance has been done by Classic Coachworks locally here in Monterey, California.